Sierra Leone is pushing desperately to become a member of the G20 Compact with Africa grouping, an initiative launched in March 2017 under the G20 German Presidency by countries of the G20 (the world leading industrialised nations), which partners with the World Bank, IMF and the ADB and with a current membership of 12 African Countries to boost private sector investment in Africa and is co-chaired by Germany and South Africa.

Ambassador to Germany Dr. M’Baimba Lamin Baryoh is working assiduously to ensure Sierra Leone become a member at the next annual meeting of the World Bank and IMF schedule for October this year and in pursuit of this he met Ambassador Robert Dogler, Director for Sub-Saharan Africa and the Sahel in the German Federal Foreign Ministry last Thursday for discussion. 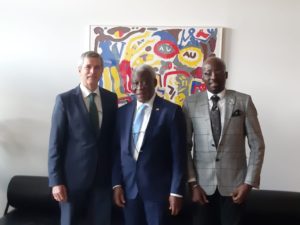 Accompanied by Deputy Ambassador Jonathan Leigh and Protocol Officer Beatrix Brewer, Ambassador Baryoh explained the present status of Sierra Leone’s intention to joining the group and how much efforts are being made. He was informed by Ambassador Dogler that an African country will have to volunteer itself for membership and approval giving at the margins of the World Bank and IMF meeting. But the offices of both financial institutions in the African country will have to do the recommendation. He then advised that Sierra Leone get in touch with both offices in Freetown.

According to him further, the G20 framework is an initiative committed to reform based on good governance targeting the economic sector, human rights etc. He further described it as a sectoral thing marked with reform partnership and a martial plan not specific at the overall look of the economy as there are other instruments from which every country can benefit.

The so-called marshal plan with Africa is supposed to treat African states differently than before; this time as equal partners in the promotion of development focussing on expansion of economic cooperation based on the German Marshall Plan Concept.

Ambassador Baryoh earlier briefed him on the successes of the free education programme, laying emphasis on vocational 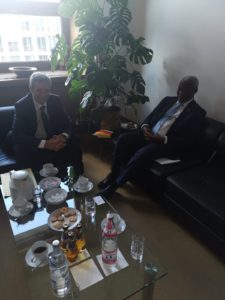 training and thus seeking German support. Mr Dogler highlighted the bilateral cooperation between Germany and Sierra Leone and explained that there is an envelope of money used for feasibility study into certain sectors away from the traditional support to private sector development like energy, education and finance and referred Ambassador Baryoh to get in touch with a Mr. Rauh who is his counterpart for West Africa.

Migration as it affects and involves Sierra Leoneans and the urgency of getting an immigration officer come to Germany for verification and identification of asylum seekers was also discussed. In the words of Mr. Dogler “we cannot allow people without passport to come and stay here. It is important to have an immigration officer come over”. Katja Dedar of the German Federal Foreign Ministry also took part in the discussion. 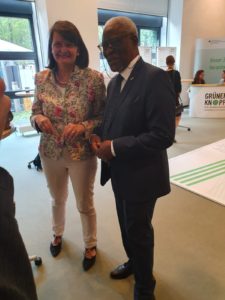 Meanwhile in a related development, Ambassador Baryoh also met with the Parliamentary State Secretary to the Federal Minister for Economic Cooperation and Development Dr. Maria Flachsbarth at a diplomatic reception wherein they briefly discussed the Compact with Africa in the area of reform partnership. They are to meet on a later date to expand on the discussion.