Commander-in-Chief of the Armed Forces 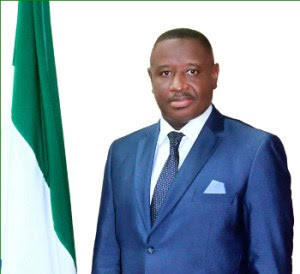 On May 12th, 2018 H.E. Julius Maada Wonie Bio was inaugurated as the 5th President of the Republic of Sierra Leone.

H.E. President Bio completed his primary, secondary and undergraduate education in Sierra Leone. Always driven by a passion to serve his country, H.E. President Bio started his illustrious public service journey as a school teacher before joining the Sierra Leone Army where he rose through the ranks as Brigadier. He previously served as Chief Secretary of State, Chief of Defense Staff, Minister of Information, Minister of Marine Resources, Deputy Head of State, and ultimately as Head of State of Sierra Leone from January to March 1996.

As Head of State, President Bio presided over the conduct of the first democratic elections in Sierra Leone in nearly three decades. In Sierra Leone, Julius Maada Wonie Bio is popularly referred to as the “Father of Democracy” because of his outstanding contribution towards the restoration of democracy and attainment of peace in Sierra Leone.

President Bio is a well-known Philanthropist and Humanitarian through the work of the Maada and Fatima Bio Foundation. The Foundation donated food and other items to victims and families affected by the 2014 Ebola outbreak in Sierra Leone and during the environmental disasters of 2015.

Most recently, he was a Senior Research Fellow at the University of Bradford, United Kingdom, pursuing a doctorate programme in Peace Studies.

H.E. President Bio credits his mother, Mamie Amie, as the person from whom he acquired all his driving principles in life – calmness, hard worker, and a staunch believer in God.