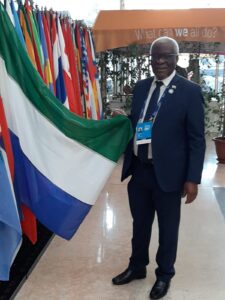 The Sierra Leone Ambassador to Germany, His Excellency M’Baimba Lamin Baryoh has on Thursday 4th March 2021, served as one of the guests of honor in a meeting that was held in Berlin Germany and addressed members of the African Group Ambassadors on the need for Sierra Leone to become one of the two Non-Permanent members for African States in the United Nations Security Council (UNSC) and congratulated the newly elected Director General of the World Trade Organization, Her Excellency Ngozi Okonjo-Iweda.

“Let me start by congratulating our very own, the newly elected Director-General of the World Trade organization (WTO), Her Excellency Ngozi Okonjo-lweda, the 7th World Trade Organization  Director-General,” said Ambassador Lamin Baryoh, adding that madam Ngozi Okonjo is the first woman and the first African to assume the office of Director General of the World Trade Organization. He adds that the battle was long and fierce but madam Okonjo won at the end of the day.  He went on to say that her elevation has brought lots of hope for the African continent and by extension, the world. Ambassador Baryoh informed members of the African Group Ambassadors that the key priority of Her Excellency Ngozi Okonjo-Iweda, is to work with member states to quickly address the economic and health consequences brought about by COVID-19.

“I wish her every success on behalf of the Government and people of Sierra Leone in her endeavors,” Ambassador Baryoh told members of the African Group Ambassadors. He also expressed  Sierra Leone’s desire to become one of the two Non-Permanent members for African States in the United Nations Security Council (UNSC) for the term 2024-2025.

“My mission has already sent Notes Verbale from the Government to your respective missions soliciting your support during the UN General Assembly to vote for Sierra Leone,” he reminds members of the African Group Ambassadors from various countries. He adds that the President of Sierra Leone, His Excellency Julius Maada Bio is presently Chairman of the Committee of Ten (C 10) of the African Union. He said that, this group consist of Senegal, Republic of Congo, Libya, Namibia, Equatorial Guinea and Sierra Leone. He went on to say that, the committee advocates and canvases for reforms in the UN Security Council. He adds particularly for Africa to have one more seat as Non-Permanent and two Permanent seats with VETO POWER in the UNSC.

Ambassador Baryoh disclosed that President Bio in a meeting of the AU on 11th February 2019, whilst presenting the report of the Committee at the Plenary Session of the United Nations warned that the recognition and legitimacy of the African demands to take its rightful place in the global Governance, he adds that it is achievable only if we continue to work together in articulating our aspirations and goals as a continent. As a matter of fact, he said that Sierra Leone has been heading this Committee for the last two successive seasons. He adds that, it is therefore our view that the experience gained by President Bio has put him in a very good position to negotiate and canvas on reforms in the UN on behalf of Africa in the UN-Security Council. He disclosed that President Bio and the other members in the Committee have been very instrumental in achieving these goals and aspirations of the AU, adding by encouraging them that Sierra Leone needs their supports in voting for a seat as Non-Permanent member in the UNSC.