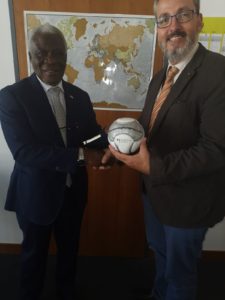 German Federal Interior Ministry have briefed Ambassador MBaimba Baryoh on the status of Sierra Leoneans legally residing in their country and those applying for asylum. The latter for whom the Ambassador asked to be provided with skill training, if possible after the verification and identification process would have been completed.

Statistical data read out to the ambassador who was accompanied by the deputy ambassador Jonathan Leigh, Head of Chancery David Gbenjen and Protocol Officer Beatriz Agudo-Breuer indicates that there are 4,564 Sierra Leoneans in Germany and 600 asylum seekers.

Dr. Christian Klos, Director of Return Policy at the Federal Interior Ministry informed the delegation of a voluntary repatriation programme, though it is a preference, most asylum seekers are not ready to accept and its success is a bit poor. According to him, the programme funded nine Sierra Leoneans to return home last year but so far this year no application has been filed.

Ambassador Baryoh inquired whether the data also includes those who claimed to be Sierra Leoneans but actually not. On the issue of verification and identification of asylum seekers, he told them it is the responsibility of immigration officers from Freetown and not the embassy since “we do not have the capability and logistic for such a process”.

Head of Chancery, Mr Gbenjen brought it to their attention that the embassy has been sidestepped over the years as the German authorities often maintain connection with immigration officials in Freetown without reference to the embassy in Berlin of their work and results.

Over the last several months, the embassy has been getting calls from persons claiming to be Sierra Leoneans and in need of consular assistance but their dialects are those of other African countries. They couldn’t respond to questions appropriately or satisfactorily. One Diamond Johnson with Nigerian accent claimed he was born at Freetown Memorial Hospital. No such hospital exists in Sierra Leone and wasn’t specific as to where the hospital is located. Another lady claimed to have attended FSSG but cannot tell where the National Stadium is and even the location of St. John. There are dozens more of such cases.

A representative from the Geman Police and two other officials connected with migration also attended the meeting.