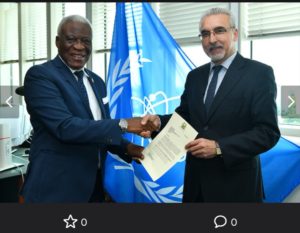 Ambassador to Germany, Dr. MBaimba Lamin Baryoh has presented his letters of Credence to the Presidents of Italy and Austria respectively, & to several multilateral organisations in both countries to which he is also accredited, and attended the 41 st conference of the Food and Agricultural Organisation (FAO) in Italy.

On June 27, he met with His Excellency Sergio Mattarella, President of Italy at the Palazzo Quirinale for the presentation of his credentials. They both held bilateral discussion on enhancing relationship between both countries. Investment in Sierra Leone was high point of the meeting. The good work of the Emeregency Hospital in Freetown was also mentioned in the discussion.

The following day on June 28, Ambassador Baryoh performed similarly assignment with the presentation of credentials to the Executive Director of the World Food Programme (WFP), Mr David Beasly at the Headquarters of the FAO. 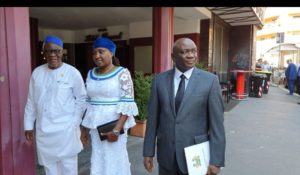 Ambassador Baryoh conveyed greetings from President Julius Maada Bio and outlined the need for help to eradicate malnutrition of children in Sierra Leone by providing nutritional food for lactating mothers, thereby contributing in reducing the infant mortality rate in Sierra Leone. He used the occasion to ask WFP support of the school feeding programme as a supplementary contribution to the Free Quality Education introduced by the President last year. And also encouraged the WFP to provide logistics and training for the development of agriculture in schools.

Letters of credence of the Ambassador were also presented to the outgoing FAO Director, Graziano da Silva. The Ambassador was invited by the FAO Chief to take part in deliberations and meetings of the FAO and other UN agencies as much as possible since he is now accredited.

Another meeting of similar event was with the Vice-President of the International Fund for Agricultural Development (IFAD) in the absence of the President who was away on official assignment. Ambassador Baryoh briefed him about the ongoing IFAD projects in Sierra Leone and the wide ranging topics of collaboration were discussed. The Vice-President was particularly interested in reasons for migration, youth unemployment, land tenure, gender equality and role of women in rural development, climate change all of which the Ambassador was updated.

Earlier this month, letters of credence were also presented to to the Federal President of Austria Van Der Bellen by the Ambassador, the Executive Director of the UN Office on Drugs and Crime (UNODC), The International Atomic Energy Agency (IAEA), to the Officer-in-Charge of the Comprehensive Test Ban Treaty Organisation (CTBTO) Ms. Tammy Taylor in the absent of the Executive Secretary and to Fatou Haidara, Managing Director of Corporate Management and Operations of UNIDO, all in Vienna Austria.