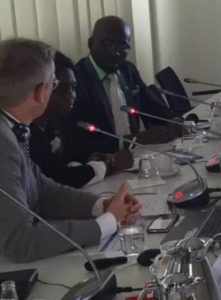 Sierra Leone’s membership in the West African Science Service Centre on Climate Change (WASCAL) is being negotiated, the country’s Deputy Ambassador in Germany Jonathan Leigh was told on Wednesday 12th July 2019 at a preparatory meeting with African WASCAL Ambassadors in Berlin at the invitation of the German Federal Ministry of Education and Research.

With the exception of Ivory Coast,  the other three Mano River Union countries namely Guinea, Liberia, Sierra Leone are not members

The purpose of the meeting was to prepare the groundwork for the hosting in Accra Ghana of the 3rd Conference of WASCAL Ministerial Council on July 30th 2019. WASCAL is a partnership between the German Federal Ministry of Education and Research as main funder and its ten West African partners of Benin Republic, Burkina Faso, Ivory Coast, The Gambia, Ghana, Mali, Niger, Nigeria, Senegal and Togo.

Membership is open to countries but it is not mandatory or compulsory for a country to become a member, Jonathan Leigh was told when he 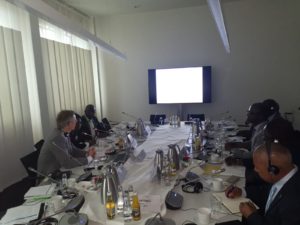 asked why is it that not all the West African countries are members of WASCAL. On relationship or collaboration with the UN Inter-Governmental Panel on Climate Change (IPCC), he was told that the latter educate researchers in negotiation and can provide expertise.

The Ghanaian diplomat concern was the sustainability of funding for WASCAL with Germany now carrying the financial burden and wanted to know if countries were up to date with payment of dues. Records made available showed that few of the countries are in arrears as at 31st December 2018 and arrears from dues currently stands at 1.843,406.91 Euros. Current payment as at the same period stood at 774, 743 Euros.

But it was disclosed that there is no sanction for late payment or non payment of dues in reply to another question from Ambassador Leigh as to whether countries in arrear of dues risk losing benefits from WASCAL. However, research projects of WASCAL are funded by donors