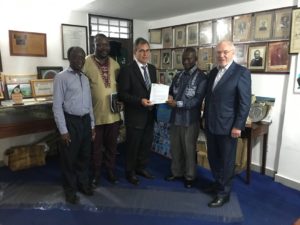 The Sierra Leone Ambassador to Germany, Dr. M’Baimba Lamin Baryoh together with a team of German investors have jet into Sierra Leone with plans of helping to promote the private sector.

The team said they were interested in investing in  “Plastic in the Environment” They told the stakeholders that,  they were interested in  recycling used plastics into useful plastic materials, thereby creating more jobs and minimizing the health hazard posed by plastic waste in our cities. Their project focuses on Green Economy, Mass Flow, Value added Chains, Technology and Recycling. The project will also develop a system to reduce the amount of plastic waste that enters the environment, particularly marine ecosystems in less developed countries like Sierra Leone. The project will be comprised with a set of concepts and preliminary designs that detail the implementation of a waste collection infrastructure, as well as vessel base treatment system and a method of commercialization of plastic waste. 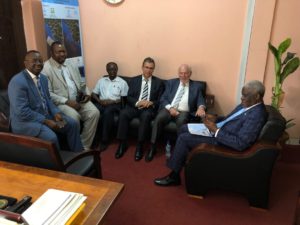 Dr. M’baimba Lamin Baryoh and Dr Sankoh of FBC, being the architects and pioneers of this exemplary move had earlier built a friendly educational relationship between the University of Sierra Leone and German Universities “Institute of Marine Biology and Oceanography” with the Technology services, and “Bremen University of applied sciences “, all in Berlin, Germany. of which memorandum of understanding were signed among the institutions. This move made by Ambassador M’Baimba and Dr. Sankoh will support the unflinching effort made the President in bringing education to the doorstep of the people of Sierra Leone.

The “plastic waste recycling’ investors said they were ready to support the Government by bringing permanent plastic recycling ship to settle in Freetown. This will help in promoting the plastic industry.

The team led by the Ambassador M’Baimba Lamin Baryoh met with different stakeholders which includes Her worship the Mayor of the Freetown municipalities, Yvonne Aki-Sawyerr, the Minister of Energy, Alhaji Kanja Sesay and the Country’s Chief Minister, Professor Francis.

The stakeholders were very impressed with the outstanding move made by Ambassador M’Baimba Lamin Baryoh and encouraged him to continue the good job for the transformation of the country.