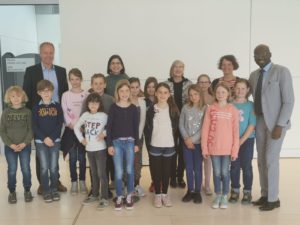 Deputy Ambassador to Germany, Jonathan Leigh was at the German Parliament (Bundestag) on Monday May 13 for an event with some pupils, below 10 years, of the Ernst-Reuter School who collectively raised the sum of 365 Euros for the Tacugama Chimpanzee Sanctuary in Freetown.

Member of the German Parliament, Gabriele Hiller-Ohm who initiated the meeting, suggested a twinning arrangement with the German School and a School in Freetown. She is Chairwoman of the SPD working committee on Tourism, and member of both the Committees on Labour and Social Affairs and Tourism respectively. She has once visited Sierra Leone. 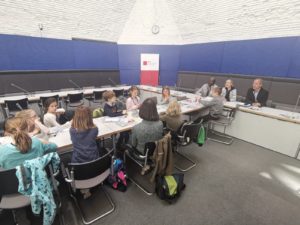 The pupils say their teachers told them about the sanctuary and when they got home explained to their parents and they were very supportive. Pupils took turn to explain what they know about the sanctuary and why they choose to help specifically citing that they want to make life better for the animals as they are passionate about their right and well being describing them as a vulnerable group of animals.

“It is necessary to raise awareness to save them from extinction,” says one pupil. Another suggests that the chimps be treated in the same manner as humans are treated saying if we destroy nature we destroy ourselves. “It is important for the animals to have space to live,” another emphasised. 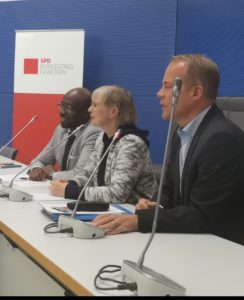 wife Sharmila, which was how the Tacaguma story began with the payment of $30 for Bruno looking sick at the time and was raised in their home until a second ape named Julie was acquired and they both grew up together.

He narrated the story of Bruno’s escape in April 2006 together with 30 others and even though 27 returned to the Sanctuary, Bruno and four others did not. He mentioned Jane Coodwall, the 84 year old chimpanzee expert who went to Sierra Leone in 1995 and was able to arrange for a Sanctuary for orphan Chimps. In February 2019, she visited Freetown again and was decorated by President Bio with the Order of the Rokel honor.

Also in attendance was Matthias Miersch, another Member of Parliament representing the SPD