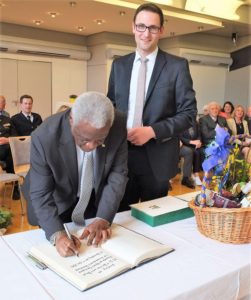 The community Denkendorf had a special guest on Thursday, 4 April in the meeting room of the town hall: His Excellency M’Baimba Lamin Baryoh, Ambassador of the Republic of Sierra Leone in the Federal Republic of Germany. The visit was arranged by Willi Drechsler, honorary consul of the Republic of Sierra Leone. In addition to the entry in the Golden Book, the honor of the rector of the Ludwig Uhland School Claudia Zährl and Birgit Förster, who has been involved in the Schul-Förderverein for many years, was part of the program for the new Ambassador. 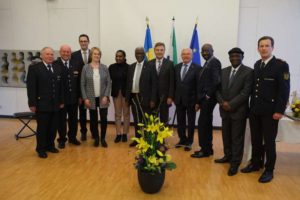 He was accompanied by the Deputy Ambassador, Jonathan Leigh, Head Of Chancery, David Benjen and Mrs Elizabeth Baryoh, wife of the ambassador.

Reception for Ambassador Baryoh from Sierra Leone in the town hall

“The regular support of the Republic of Sierra Leone is a matter of the heart,” said Mayor Ralf Barth at his welcome. He emphasized that the community wants to continue to actively work for international understanding. Prior to the reception in the town hall, the head of the administration, together with the new ambassador of the Republic of Sierra Leone in the Federal Republic of Germany SE. M’Baimba Lamin Baryoh visits the Ludwig Uhland School. Barth handed the ambassador a gift basket with products from Denkendorf, Esslingen and the region. In addition, Baryoh was allowed to register in the Golden Book of the community. “I have not received such a reception in the five months since I am ambassador in Germany,” the physician thanked him and reported on the situation of his country, the great poverty in Sierra Leone and the great gratitude for support from all over the world, including Denkendorf. The visit was arranged by Honorary Consul of the Republic of Sierra Leone Willi Drechsler from Denkendorf. Drechsler reported on numerous activities in Baden-Württemberg for Sierra Leone. The community Denkendorf has supported Sierra Leone since 2006, among other things with several fire engines. 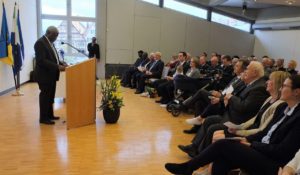 Around 60 guests accepted the invitation to the reception. In addition to mayor Peter Jahn aD and his wife Regina, former mayor Walter Dieterich, the ladies and gentlemen of the municipal council were also the ARGE chairman Walter Reber, the ARGE honorary chairman Fritz Drechsler, pastor Dr. med. Rolf Noormann, as well as the director of the Rolf-Deuschle-Heimatmuseums Rolf Deuschle from Denkendorf represented. The Bundestag and Landtag delegates had to apologize as well as District Administrator Heinz Eininger. Dr. Denkendorf was also a guest in Denkendorf. med. Beate Jacob from the German Institute for Medical Mission from Tübingen, the managing director of the Foundation for Development Cooperation Baden-Württemberg Klaus Weingärtner and Barbara Böttcher from the association Sierra Leone Baden-Württemberg eV and representatives of the State Fire Brigade Association, 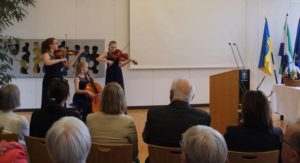 Honors for the commitment of the Ludwig Uhland School

The Ludwig-Uhland-Schule and its sponsoring association have joined the AG step by step since 2005 for the Republic of Sierra Leone. In Rotifunk three schools, a teacher’s house, a first aid station, a bakery and a fountain on a campus for about 400 girls and boys have emerged. Rector Claudia Zährl and Birgit Förster have now been honored by Ambassador Baryoh with a certificate of honor and a trophy for their extraordinary commitment. Honorary Consul Willi Drechsler highlighted the numerous fundraising activities in his laudatory speech. 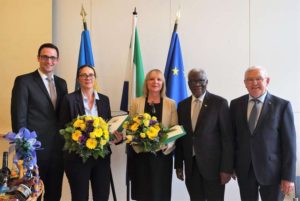 Mayor Ralf Barth thanked for her exemplary volunteer work. “We’ve gone ahead, but that’s only possible if you have a team that shares the same vision,” said Claudia Zährl. Birgit Förster also emphasized: “We only managed that together. I thank you all.