Secretary General and CEO of the German Deutsche Welthungerhilfe, Mr. Mathias Mogge who paid Ambassador Dr. M’Baimba Baryoh a working visit on Thursday March 27th 2019, commended the Government of President Julius Maada Bio for the positive changes already made in Sierra Leone and its endeavours toward the aggressive fight against corruption, policies of good governance, fostering peace and security.

Mr. Mogge catalogued a series of projects Welthungerhilfe is carrying out in Sierra Leone which includes working in sectors such as Agriculture, WaSH (sanitation, marketing and hygiene promotion, waste management), Energy sector and Skill development amongst others.

But seemed disatisfied at the treatment encountered by NGOs in Sierra Leone, including the Welthungerhilfe organization, which he advised government to look into. He highlighted some bureaucratic problems and the issue of land,  whilst hoping that the government would understand the situation of the NGOs and relax their regulations.

Formally welcoming him, Ambassador Baryoh thanked the CEO and commended his organization for the development programmes they are 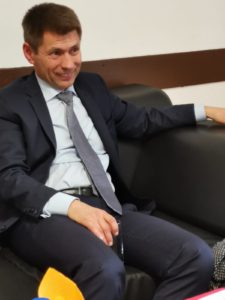 undertaking in Sierrra Leone. He stated that the Government is now trying to regulate the activities of all NGOs working in Sierra Leone and asked for some patience.

The Ambassador further spoke about future projects which the Deutsche Welthungerhilfe could deal with in Sierra Leone, such as the School Feeding Programme and also training school children in food production. He also expressed the desire of the Government in promoting vocational training. The CEO and Secretary General of Deutsche Welthungerhilfe, Mr. Mogge promised to work on the issues raised by the Ambassador.

. Ambassador Dr. Baryoh speaking on behalf of the Government of Sierra Leone informed  Ms. Kortmann of an  intended application of the Republic of Sierra Leone to become a Reform Partner Land within the context of the Marshall Plan for Africa. Ms. Kortmann expressed appreciation with this initial step of the Sierra Leone Government which shows genuine intention of introducing forthright change in the country.