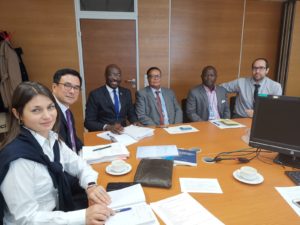 Sierra Leone is being urged by the International Atomic Energy Agency (IAEA) to amend text of the SMALL QUANTITIES PROTOCOL (SQP) and conclude the ADDITIONAL PROTOCOL (AP) as part of safeguards agreement with the watch dog body based in Austria Vienna.

Copies of the relevant documents were on Tuesday April 10th 2019 handed over to the Sierra Leone Deputy Ambassador to Germany Mr. Jonathan Leigh in a bilateral consultation meeting with officials of the IAEA in Vienna during the two-day IAEA SAFEGUARDS OUTREACH WORKSHOP FOR DIPLOMATS. Sierra Leone has a Permanent Member seat in the IAEA.

Ambassador Jonathan Leigh was also informed that Sierra Leone is to host a United States Of America Mission Department of Safeguards Outreach in Freetown between June 17th to 21st  in which the IAEA will also be involved.

The IAEA members were briefed on the involvement of their work and project in Sierra Leone both in Agriculture and Health based on feedback received a week earlier from Shaukat Abdulrazak, the Director for the Division for Africa at the IAEA Department of Technical Cooperation in a meeting and interactive session in Berlin with some African Diplomats. And the request to help train one of Sierra Leone’s medics in nuclear medicine was forwarded to the team.

During the two days events, Mr. Derek Lacey, Special Assistant to the IAEA Director-General on Nuclear Safety, Security and Safeguards, 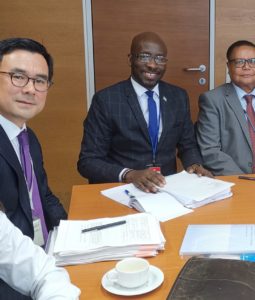 Tuesday morning started with a meeting of the Department of Technical Cooperation in which the Section Head gave an overview of the IAEA TC Programme highlighting their partnership with the WHO ( focusing on Cancer radiotherapy not control), the FAO in relation to animal decease control and nuclear technology control in Agriculture, plant breeding, resources and food safety and the UNEP focusing on ground water which invariably is the main strength of the IAEA.

The workshop was climaxed with visitations to the IAEA Laboratories in Seibersdorf for meetings with the IAEAs Office of Safeguards Analytical Services, the Nuclear Sciences and Applications Project Manager, Environmental Sample Head and the Head of the Dosimetry Laboratory.

Sierra Leone is being considered for the provision of a radiotherapy to treat cancer in the coming years but the country already has the technique to detect and control.