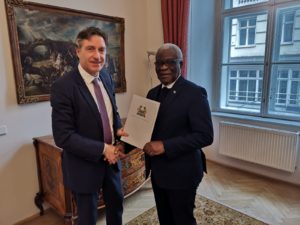 Ambassador to Germany Dr. M’Baimba Baryoh, also accredited to Italy and Austria last Thursday May 2nd 2019 respectively presented his letter of credence and the letter of recall of his predecessor to Ambassador and Chief Of Protocol, Federal Ministry of Austria, Enno Drofenik in Vienna.

Both Ambassador Baryoh and Enno Drofenik held discussion centred on the relationship between Sierra Leone and Austria. And Mr. Drofenik told him he has full recognition to carry out his duties whilst waiting to present his credentials to the President of the Austrian Federal Republic. Also present during the brief ceremony was Bernhard Faustenhammer who is Minister Plenipotentiary and Deputy Chief of Protocol at the Federal Foreign Ministry of Austria. 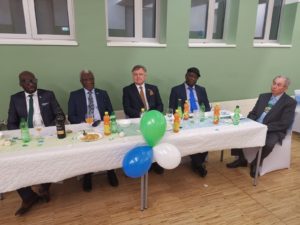 He was accompanied by the Deputy Ambassador, Jonathan Leigh, Head of Chancery David Gbenjen and the Consulate General of Sierra Leone in Austria Dr. Wolfang Breitenthalar.

Later in the day, the Ambassador and delegation met Nella Hengstler, Regional Director Africa/Middle East ADVANTAGE AUSTRIA of the Austrian Economic Chamber. She has spent several years working mostly in West Africa, precisely Nigeria and been to Sierra Leone a few times.

On Saturday, Ambassador Baryoh and delegation were guests of honor at an event marking Sierra Leone 58th Independence anniversary organised by the Sierra Leone Union in Austria, an event also graced by nationals from The Gambia, Nigeria, Turkey, South Africa and Austria amongst others. A representative of MERCY HOME, an NGO with an orphanage in Freetown, Sierra Leone was given the platform to make a brief speech.

Speaking at the event, Ambassador Baryoh explained in a nutshell the New Development Plan for Sierra Leone unveiled recently by the Government of Sierra Leone. Progressive strides made in the areas of Education with specific reference to the free quality education across board since President Maada Bio took over, the fight against corruption and how the country in the midst of these has regained international recognition. 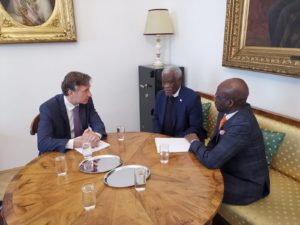