↓
Home Menu ↓
Home→Blog→Uncategorized→FBC on exchange programme with University in Germany.
Spread the love 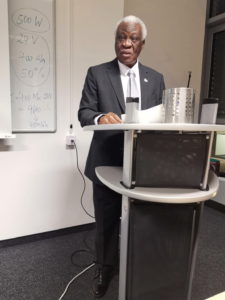 A student exchange and research teaching programme between the SRH Hochschule Berlin, a private University in Germany and FBC (University Of Sierra Leone) is being considered following extensive discussions between Ambassador M’Baimba Baryoh and Prof. Hartman, Vice Chancellor SRH, and a follow up visit to the University on the evening of February 14 by the Ambassador where he delivered a speech on ‘NEW INVESTMENT STRATEGIES’ of the Government of Sierra Leone to faculty members & students.

The University offers courses in applied sciences with focus on renewable energy and when Prof. Hartman visited the Sierra Leone embassy earlier, he stated categorically during the discussion that “wherever energy is mentioned I run to go there”. This was when Ambassador Baryoh extended an invitation for him to visit Sierra Leone where he spoke with Prof. Foday Sahr, Vice-Chancellor USL during which a MoU was planned and now ready for signing. 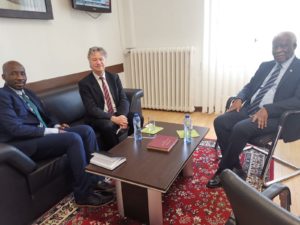 Ambassador Baryoh stated in his speech at the University that the NEW DIRECTION government of President Maada Bio has key areas of priority including energy, agriculture, health, tourism, marine resources with education as the flagship programme in which 21% of the national budget is invested which has seen the introduction of free, quality primary and secondary education and extended recently to include some core courses at university level.

He stressed that the Sierra Leone is politically stable, the fight against corruption is making remarkable successes and gave the assurance of investors protection and security whilst explaining the conduct of three democratic elections that were free, fair and transparent between 2002 and 2018 with the change of governance on two occasions.

Also, he elaborated on challenges faced travelling by sea between the international airport and the capital and the plans to construct a bridge linking the airport to the city. Sierra Leone he emphasised is completely ready for business.

The ambassador was accompanied by his wife Elizabeth Baryoh and the Deputy Ambassador Mr. Jonathan Leigh and both took part in discussions on the side-line.