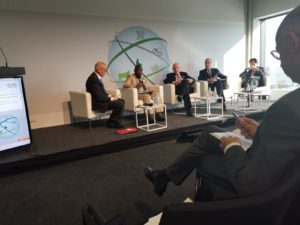 Agriculture Ministers from across the world have ended their 3-day German Forum for Food and Agriculture meeting hosted by the Federal Ministry of Agriculture and held at the City Cube in Berlin.

Sierra Leone’s Agriculture Minister, Joseph Ndanemah participated actively as one of four panellists on the topic OUT OF DEADLOCK: NEW VISION FOR AGRICULTURE AND TRADE, the only African on the panel, on Friday morning where he stated he would prefer trade to aid and grant at the pre-briefing session.

And in the session proper before an audience of about 120 attendees, including Ambassador M’Baimba Baryoh, the minister suggested the dismantling of trade barriers as Agriculture is important to keep rural areas going.

Later in the day, German Chancellor Angela Markel addressed the session which was exclusively for ministers.

On Saturday morning, minister Ndanemah chaired a session discussing digital agriculture using the Chatham rules, in his words. And later reported on its outcome at a session chaired by the Germany Agriculture Minister culminating to the end of the event during which the draft communique was overwhelming approved.