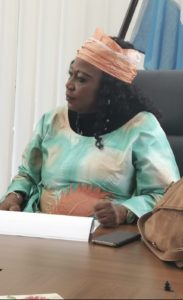 A delegation from Sierra Leone headed by the Minister of Tourism, Memunatu Pratt and comprising officials from her ministry, the National Tourist Board and the Relics and Monument Commission respectively, arrived in Berlin Germany on Monday 4th March ahead of the 5-day annual International Tourismus Bourse (ITB) which bring together countries from around the world to showcasing and exhibiting their tradition and culture for touristic attraction.

On the evening of their arrival, the minister was welcomed at the embassy and held a briefing session with the diplomatic staff.

She was upbeat about rebranding of the tourism sector both at home and more importantly abroad and seemed very pleased with the success and significant progress made so far. She revealed that from records made available by the immigration department at the Lungi International airport, 20,000 tourists visited Sierra Leone in the last three months. And the priority is open up this part of the world to Sierra Leone touristic attraction.

The ITB is a global event attracting about 60,000 people across the world this year. Sierra Leone will be showcasing her cultural values and have a booth where all of these will be displayed or made available, including local cuisines and traditional dance. 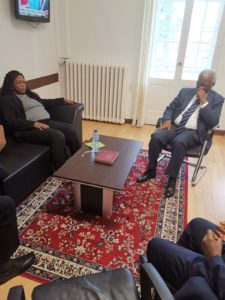 Ambassador MBaimba Baryoh promised to do follow ups on all of the issues raised and discussed as he too has used every available platform since assuming office to invite investors to focus attention on Sierra Leone tourism sector emphasising that it is a priority area of President Bio and the NEW DIRECTION.

On the morning of Tuesday 5th March, KPRN Network represented by Hanna Kleber, Managing Director and Jens Frenzel, Project Manager for Africa who are in charge of planning the Sierra Leone event in Germany, held a briefing session at the Sierra Leone embassy at which the Minister, representatives of the tourist board and staff of the embassy were in attendance, presented a comprehensive plan for the uplift of the tourism industry in Sierra Leone over a three years period which the Minister and Ambassador Baryoh nodded.