German Federal Foreign Office Thursday 12th December hosted the 7th Ambassadors’ Roundtable on the topic “IMPROVING PERFORMANCE AND SUSTAINABILITY OF AGRICULTURAL AND FOOD PRODUCTION THROUGH DIGITALISATION” organised by the German Export Association for Food and Agriproduct (GEFA) and attended by Deputy Ambassador of Sierra Leone to Germany, Jonathan Leigh.

Tanja Werheit, Deputy Head of Division International Economic Affairs, Focal Point for German Business in the Federal Foreign Office says this was the last round table for the year and with a different topic which is digitalization and Smart farming. Describing it as complex and challenging for years to come as it is in line with climate change. The world, she says, is faced with the challenge of feeding the growing population.

Patrick Honcoop, Head of Product Partnerships of 365FarmNet Group spoke on the way to Smart Farming in his keynote address. He called it a major trend. No future. It is happening today. 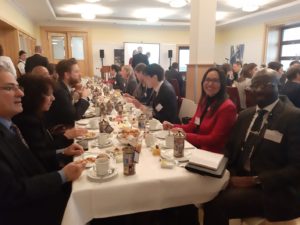 Prof. Dr. Karin Schnitker addressed her audience on the Hype or real application potential for the international agri-food supply chain in the context of block chain which is a 24/7 data availability farm management and automated documentation of field operation with three core fields of application.