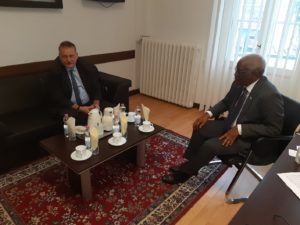 Christian Widmann is arriving in Freetown on Sunday the 12th January 2020 as the new Director of GIZ (German Society for International Cooperation) for a three year period as a successor to Malte Kirchner whose tenure have come to an end.

GIZ works in direct collaboration with the German Ministry of Economic Development and Cooperation (BMZ) which supports numerous projects in Africa, several of which are ongoing in Sierra Leone.

On Tuesday afternoon, Mr. Widmann paid a courtesy call on the Sierra Leone Ambassador to Germany Dr. MBaimba Lamin Baryoh and their discussion centred mainly on GIZ operations in Sierra Leone wherein the ambassador suggested a further strengthening of relationship between GIZ and Sierra Leone. Mr. Widmann informed Dr. Baryoh about pending funding expected from the European Union for its projects.

Dr. Baryoh also briefed him on matters of national interest namely the political, economic and security situation as it is presently and where Sierra Leone as a country is coming from; rebel war, Ebloa etc. to a very peaceful and politically stable country today. He drew his attention to the recent visit of the German Foreign Minister to Sierra Leone where he returned with a very good impression.

Mr. Christian Widmann had previously worked in both Ghana and Nigeria.