Sierra Leone has once again participated in the World’s leading International Travel Trade Fair (ITB) in Berlin, Germany. The ITB is a platform for trade visitors, business partners and tour operators across the globe. It is aimed at encouraging individual countries to exhibit their touristic potentials in an effort to attract meaningful investors.

During the exhibition where Sierra Leone’s touristic and business potentials were extolled, the General Manager of the National Tourism Authority, Cecil J. Williams said it is a forum worth participating as according to him, it creates an opportunity to not only display products and provide relevant information about Sierra Leone, but also to establish networks with business partners and to update themselves about the trend in the tourism sector.

Mr. Williams said their participation in this year’s trade fair is to provide aid to investors and inform them about the rich potentials that Sierra Leone has in the business sector.  This is why government has also established legislative instruments to provide incentives for investors – the Tourism Act and Finance Act 2011. 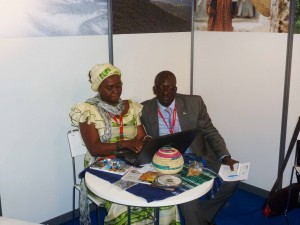 Considering the high unemployment rate and efforts to improve the socio economic development in the country, Mr. Williams believes that tourism is the answer to those many underlying problems.  He noted that the industry has a multiplying effect touching on every facet of society. The reason, he went on, was because of its people oriented scheme which unlike other mechanised industries like Minerals and Agriculture, encourages everybody from various discipline. “….tourism does not only bring economic benefit but enhances the social status of the people. Once employed in the tourism industry, your status is improved,” he noted, adding that recent developments ranging from increase in employment rate and revenue collection lend credence to the aforesaid.

It could be recalled that the industry has created employment to approximately five thousand people, with a total contribution of $ 36.9 million into the country’s national coffer. Tourists arrivals in the country have equally increased from 33 thousand to 52 thousand in recent times.

The General Manager further disclosed that other major development activities will soon be undertaken by two Hotel chains – Radison Blew and Hilton Hotel. They will construct 200-bed Hotels in the country, in an effort to increase the capacity of the hotels in the country.  These developments he said are good news for operators who are interested in going to Sierra Leone.

Mr. Williams described the relationship between the National Tourist Board and the private sector as vital. “That is why we are here with a number of private sector participants. They are the main suppliers of services and our role is to facilitate,” he affirmed.

In another development, the tourism sector has secured a $ 3million fund to enhance human resource and capacity building, sector governance review and eco-tourism policy diversification.

“As the world population grows, so does the demand for high-quality foodstuffs. It is estimated that there will be nine billion people to feed in 2050,” those were the exact words of the German Minister of Agriculture, Ilse Aigner, in her welcome statement at the Global Forum for Food and Agriculture(GFFA), during the 77th International Green Week in Berlin last weekend.

The forum assembled approximately 70 Agricultural Ministers from across the globe, including Sierra Leone, to develop strategies aimed at addressing problems affecting food security and economic growth. The green week is not only the world’s biggest fair for food, agriculture and horticulture, but also an important forum for experts to discuss global issues that arise in the field of agricultural policy. It was in line with the aforesaid that President Koroma declared Agriculture as his government’s top priority in 2008. This is a clear demonstration of his government’s commitment to ensure food security and economic growth through mechanised and commercialised farming in Sierra Leone. While the discussions were also centred on the fight against hunger and food waste in both developed and developing countries, Sierra Leone has been the champion to make agriculture as an engine for increased earning export, youth employments and infrastructural developments in the country. This was stated by the Minister of Agriculture, Forestry and Food Security, Dr. Joseph Sam Sesay, in an effort to market his country’s agricultural potentials

He specifically mentioned the ongoing development programmes within the fundamental policy framework of the Comprehensive Africa Agricultural Development Programme in that sector. The Minister informed meaningful investors in Germany and colleague Ministers that his government is committed to ensure efficient and effective resource utilization, cross cutting issues of gender, including environmental sustainability and social protection.  In order to achieve the aforementioned objectives, Dr. Sesay said government allocates 40% of its national budget to subsidise both small and large scale farmers across the country.  The commercialisation of small scale holders as part of the National Sustainable Agricultural development Programme, caters for farmers with adequate provision of agricultural materials to enable abundant production of food in the country.  Such developments strides are fundamental tenets designed to lay a proper foundation that would guarantee food sufficiency in 2050.  The role of agriculture in ensuring that people will not go to bed hungry need not to be overemphasised. 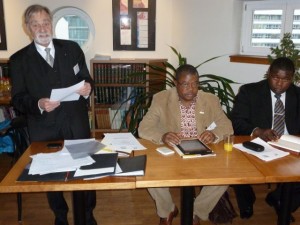 This was why the host German Agriculture Minister, Ilse Aigner, said the fight against hunger in developing countries should be a central focus with specific emphasis on the crucial role that the agricultural sector should play in that regard. She said without a sustainable and productive agriculture and food security, the fight against hunger will not yield fruits. The Federal Minister referred to the Green Week as a real magnet for the public, politics and science. Because it offers a podium for high ranking world Ministers to deliberate on issues that are central to the social and economic well being of the world population.  She expressed worries that one billion people are already suffering from hunger as disclosed by Food and Agriculture Organization (FAO). She therefore called on government representatives from around the world, business expert and researchers from development cooperation to make meaningful contributions that would add value to the International agriculture and food policy.

Meanwhile, African Ministers, senior technical representatives from governments, regional organizations, the private sector and academia, also had fruitful discussions on the modernization of African Agriculture as a contributing factor in food security towards a new paradigm. They also looked at mechanisms as to how hunger should be minimized and the development of various methods to integrate farmers in respective countries.

The events which were climaxed by the 4th Berlin Summit of Agricultural Ministers came up with a joint declaration on issues regarding global food security and poverty alleviation, focusing on farming with limited resource and sustainable growth. The growing demand for food, soil protection, management of water resources and the protection of small scale farmers are among the 27 key issues discussed in the summit.

The results of the Berlin Summit of Agriculture Ministers will be incorporated as in previous years in ongoing international negotiations. Above all, they should give impetus to the UN Conference on Sustainable Development, to be held in June 2012 in Rio de Janeiro.

Before the final declaration was made, Dr. Sam Sesay told his colleague Ministers that there is a need for increased supply of food production and therefore called for the establishment of intensive and sustainable strategies for effective environmental management.

It has come to the notice of the Ministry of Transport and Aviation and Sierra Leone Civil Aviation Authority that airlines are in the habit of disembarking passengers on arrival without their baggage on most of their flights during the festive seasons. Such actions most times result to very unpleasant consequences to both the passengers and the airlines. END_OF_DOCUMENT_TOKEN_TO_BE_REPLACED

The ongoing 14th session of the UNIDO General Conference has assembled hundreds of participants including Heads of states, Ministers and other high-level government officials from around the world.

They are discussing issues pertaining to industrial revolution and sustainable development. The session which started November 28 in Vienna is expected to end on the 2nd   December 2011.

This year’s theme “The New Industrial Revolution: Making it sustainable” will focus on strategic and sustainable industrial developments which are crucial in the environmental, economic and social sectors. According to UNIDO “This is of particular relevance to developing countries in the present international development context.”

During the session, a speech delivered by Sierra Leone´s Trade Minster Dr. Richard Conteh, on behalf of His Excellency Dr. Ernest Bai Koroma, highlighted the importance of this year’s theme and the challenges which could be addressed through hard work and commitment.