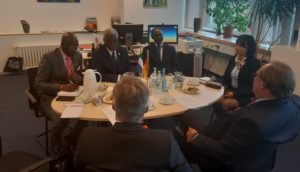 Sierra Leone is close to meeting the mandatory 15% budgetary allocation to its health sector in line with the Abuja Declaration, Health and Sanitation Minister Pro. Dr. Alpha Wurie told German government officials in a series of bilateral meetings, and in separate meeting with SIEMENS Healthliners   during his recent invitation to Berlin to attend the World Health Forum and the 6th German-African Healthcare Forum respectively, the latter in which he participated in two panel discussions.

According to the Minister, 10.6% allocation was made to the health sector this year which is above 7.5% last year and 6.7% in 2017. He described it as moving in the right trajectory more so when President Bio has given instructions for a new intake of 4,000 staff meaning more personnel to work in the health sector something that was impossible some five years ago.

The Minister, accompanied by the Ambassador Dr. M’Baimba Baryoh and the Deputy Mr. Jonathan Leigh, was briefing Dr. Stefan Oswald Director-General Marshal Plan with Africa, displacement and migration in the Federal Ministry for Economic Cooperation on the status of the health sector in Sierra Leone and seeking Germany support in getting the sector upgraded specifically when there was glaring demonstration of weakness in the system during the Ebola scourge. He however thanked the German government for its support to Sierra Leone during that period. He spoke about equipping Community Health Centres in Chiefdoms to make them the epicentre they should have been despite getting support from different countries. 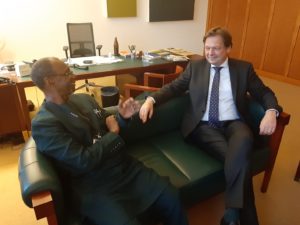 Dr. Wurie also briefed him about the introduction of a nationwide ambulance service, procurement of an ambulance boat for Bonthe, the plans for the renting of holding houses for easy access to treatment facility and the expansion of the blood bank service etc.

Other topical issues discussed were the First Lady of Sierra Leone project against child pregnancy and early marriage, and her “HANDS OFF OUR GIRLS CAMPAIGN” which she is taking nationwide. Both Rene Franke, Senior Policy Officer in the Ministry and Ambassador Baryoh took part in the discussion.

Dr. Wurie also met with officials in the Federal Foreign Ministry and thanked the German government for providing training to the Sierra Leone Army whilst also requesting from the federal foreign Ministry training for Sierra Leonean Protocol Officers.

In the meeting with SIEMENS, led by its Senior Vice-President for Africa Luc Van Overstraeten, Dr. Wurie reported on the status of the Primary Health Care facilities, Community Health Post and Maternal Health Post respectively across the entire country with every of the 149 chiefdoms having at least one to deliver maternal and productive health service and do basic diagnostic work. Discussions also included the establishment and equipping of the Intensive care units in 15 secondary and tertiary hospitals and labs vital for sustaining life.

The meetings were organised and facilitated by the Ambassador to Germany, Dr. M’Baimba Baryoh